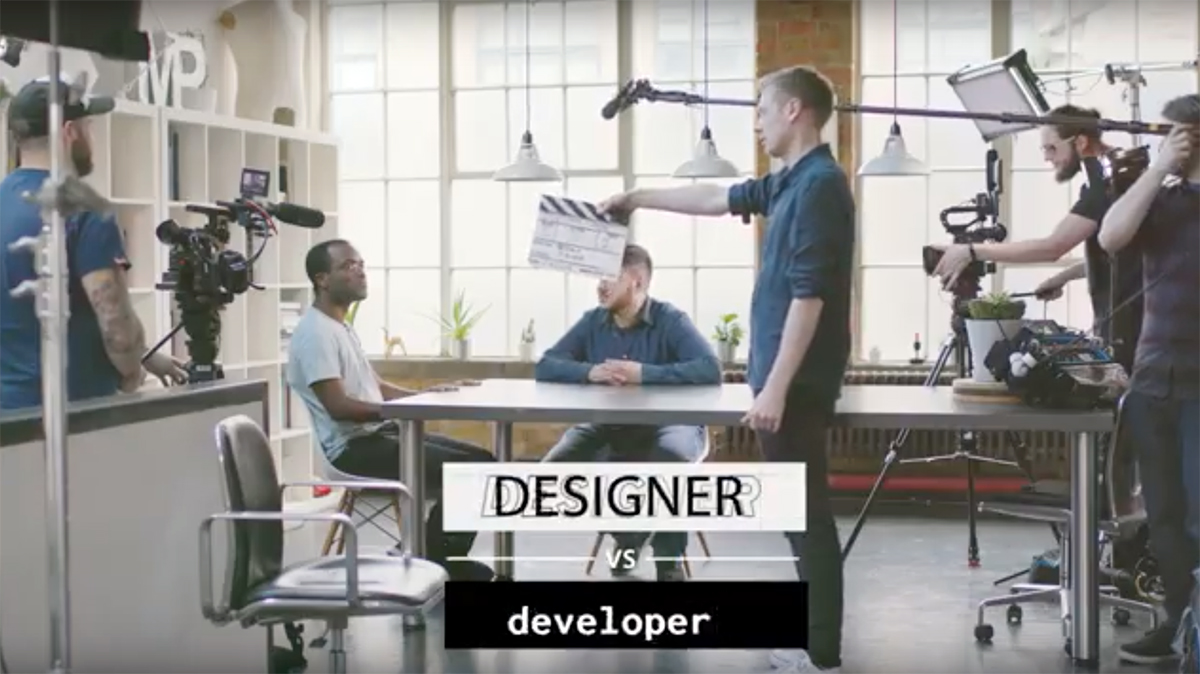 As a Design Advocate at Google, Kurtuldu is trying to iron out some of the issues that can cause friction between designers and developers with Designer vs Developer, a six-part YouTube series and podcasts. Released every two weeks, each episode deals with a different issue, from effective collaboration to whether too much testing and data ruins the creative process. All the episodes will be posted here on the CR site.

In episode 3, Kurtuldu speaks to Ade Oshineye, Developer Advocate on the Google Developers Relations Team, about the influence of the archaic language of print on web design.

Here, Kurtuldu discusses the wider issues around terminology and how it can limit our imagination:

“If I had asked people what they wanted, they would have said faster horses”. This quote is often attributed to Henry Ford. Even though there is no evidence to prove he actually said this, the quote has become a mantra in some design circles to mean: don’t ask the users what they think, and if they articulate what they want, simply ignore them. For me, this assumes that designers have some innate knowledge of everything and that the average person is ‘stupid’.

For a more positive take on the same idea, my suggestion would be to dig a little deeper and listen to what people are after. When a person discovers something new that is unrelated to anything they’ve seen before, they try to apply ideas that superficially seem similar and match the extent of their current knowledge. This process helps us build a mental model of the thing they really want. For example:

I want to go faster, yet I have no concept of a car, all I know are horses. So I ask for faster horses.

Really, what the users are trying to say is that they want to go faster. I’ll call this thinking analogue. However, once users have experienced different modes of transportation, the idea of traveling faster makes more sense on its own and is easier to express clearly. In other words, the more frames of reference we have for something, the better we understand and can express it. The language used here is critical because if we end up using the wrong language, we could end up working on the wrong thing, ie, figuring out how to make horses go faster rather than creating something that allows us to travel faster.

This brings me neatly to the web and its influence on the world of graphic design. From our points of reference to the tools we use, graphic design has championed a way to create websites. Take for example when we talk about pages. Nothing on the web is a page, but we don’t have a concept of what these things are. We can call them documents, but that word doesn’t help project a meaningful mental image. Perhaps this is why we design sites as static pages or have done so for the longest time.

In more recent years we have been creating things on the web in a more modular fashion. Brad Frost has been doing great things conceptually with what he calls Atomic Design, building on the idea of systems that evolve rather than static pages that are locked the moment they’re printed. I like the idea of atoms as they reinforce the concept that websites are alive.

For the web this meant that we tried to stuff as much visual clutter to the top: logos, navigation bar, intro statement, article title, hamburger menu, search bar and the kitchen sink. This has become the expected presentation on the web, a world where every site looks like a WordPress template. I’ve been guilty of doing this myself. In my defence, at the time I didn’t fully understand what the web was – a never ending connection of particles, or the way people use it – as a never-ending journey of clicking, tapping or jumping from one place to the next. I imagine a great website being a bit like a film where the viewer could jump in and leave at any point and still understand the story. But due to the incorrect use of language, we’ve superimposed ideas from other mediums that after a while break badly.

Take the whole responsive web; previously we designed in a fixed-width environment until Ethan Marcotte reminded us that the nature of the native web was fluid, not fixed. In the past, we believed users wouldn’t scroll, but we have come to discover they will if the content is inviting. Users can use anything depending on the context they’re in and if they have no other choice. They’ll accept their predicament until a better alternative comes along. Users will wait for a long time for the map to load on their screen if they’re in an unknown place and they desperately need to find where their hotel is. They’ll wait in line for a taxi for ages if there are no other options. Then along comes a new system, app, method or understanding, and our expectations change. That becomes the new standard, and we start to think in digital. This, my friends, is how the industry progresses.

I feel our use of language has affected the way we create and I wonder how many opportunities we’ve missed due to not designing in a way that was natural to the web. Even for content we are creating, such as this article, I ask myself “Is this even the best place to be reading this? Is this the best way to be consuming these ideas?”

We often look at each step of progress as this magical path of perfection, that changes in an instant with each innovation or realisation. We forget about the cultural baggage that comes with that change or understanding. Take one of the greatest British scientists of all time, Isaac Newton, as an example. At some point, he tried to develop a Philosopher’s Stone, a magical item that could turn base metals into gold. He then went on to building the first practical reflecting telescope, but was nonetheless a wizard (I know the British like to use the word alchemist, but he was a wizard). He carried that baggage of the past, even when he developed his theories of gravitation.

For us, this means reflecting on our baggage, the world of print and realising how much of it has and is still holding us back. And how much of the adopted language is still affecting the nature of what we’re creating? In the same way, we might now be replacing graphic design with native app design, diluting the nature of the native web. It’s true that we have for the longest time envied the world of native apps- to the point where we’re now trying to replicate its UX including its flaws. Looking at you, hamburger menu.

In my conversation with Ade Oshineye, he suggested we remove the word ‘apps’ from whatever we do on the web and just call them ‘sites’. Then we can start to develop language native to the web, where we design for the its environment and not for the context of print or any other platform.

George Orwell once wrote an essay about the English language and argued for clarity instead of vagueness and political conformity:  “Underneath this lies the half-conscious belief that language is a natural growth and not an instrument which we shape for our own purposes.” I feel we have to object to conforming to existing platforms and move away from vague language for the web to find its voice. Then perhaps we can start designing below the fold.

Designer Vs Developer can be seen here on the Youtube Chrome Channel. You can also listen to a longer version of the conversation by downloading the podcast here.

Why are so many companies changing their logos to flat designs?